by NioX5199
Hi everyone! I created a little app for all tv show fans out here. It's called tvDroid and uses tvrage.com and the tvdb APIs to provide you the air date of the next episode of your favorite shows. You can search and add series to your favorites then directly display the last and next episode air date. Here are some screenshots. You can get tvDroid from the Appslib. 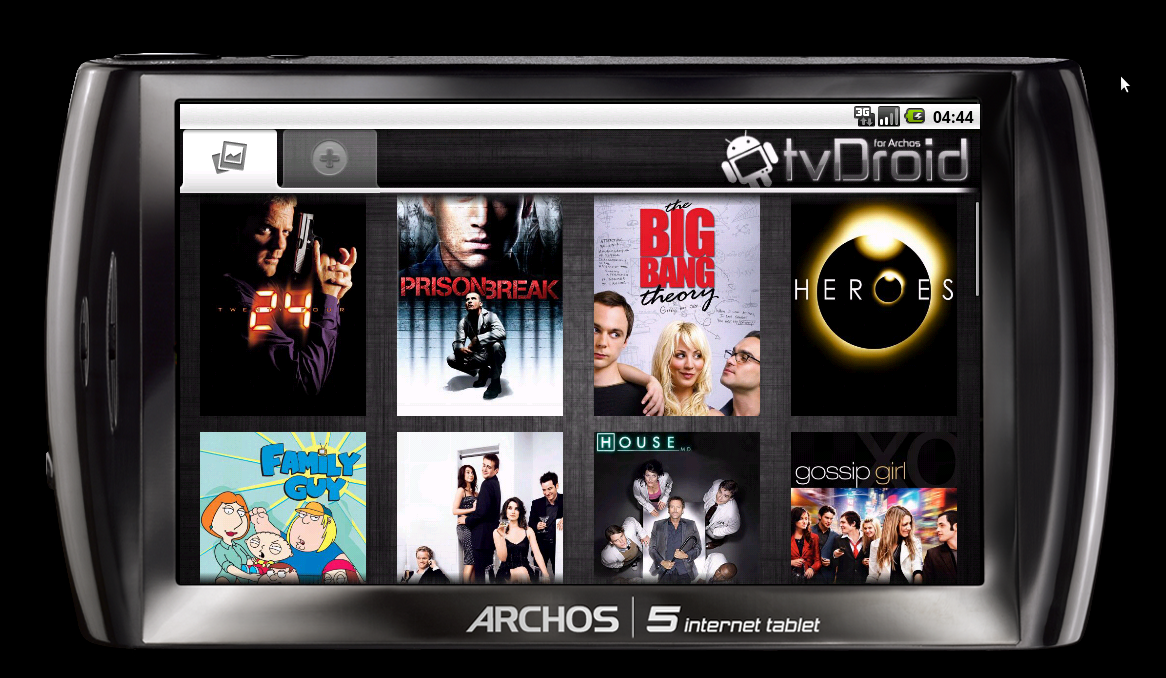 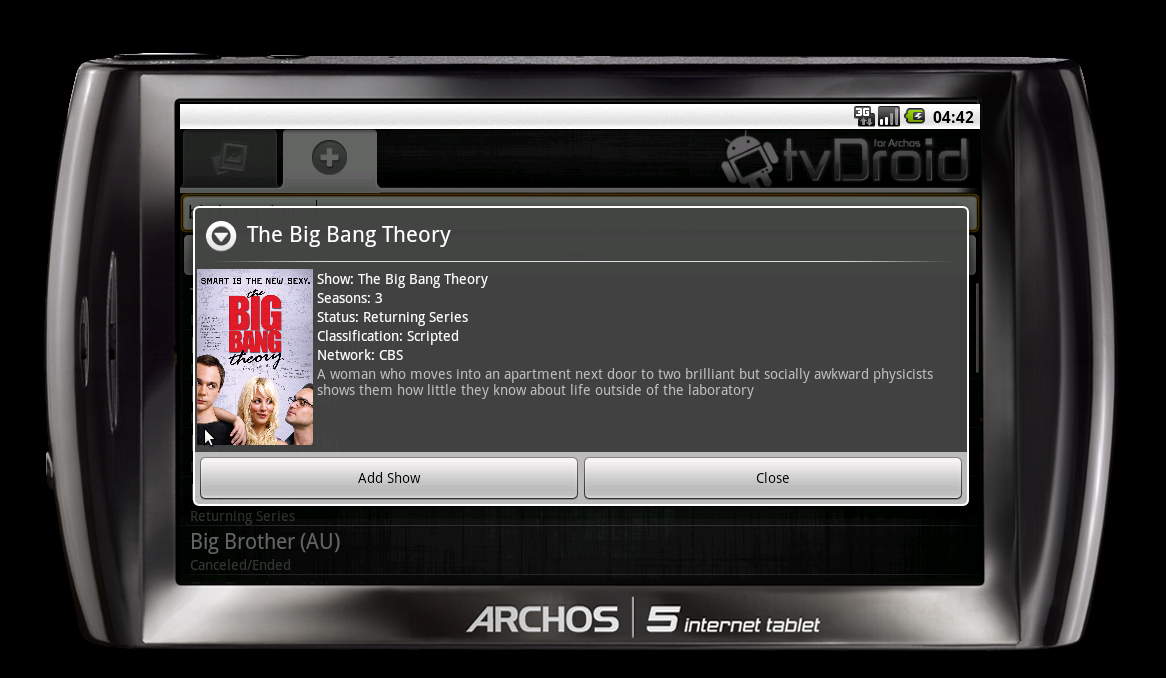 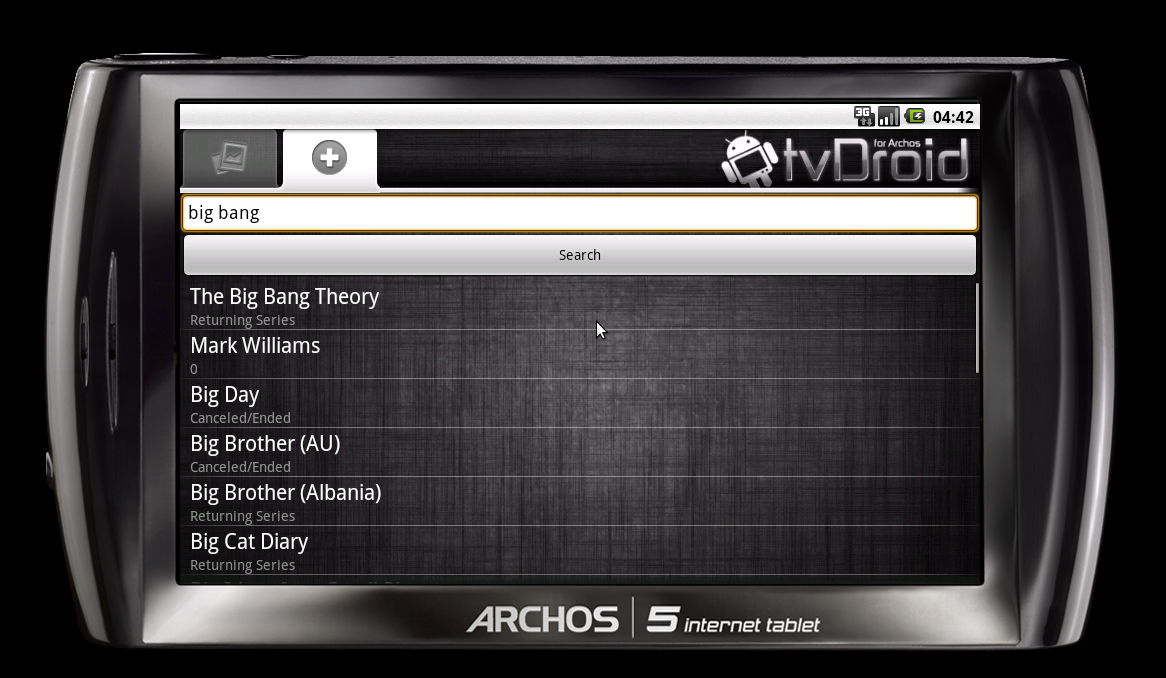 I'd like some feedbacks from owners of the Internet Tablet so I can make it better. Thanks bye.

by SheilaHoff
This looks great...BUT... will be AWESOME when we can stream these shows! Then we'll have arrived. Thanks for your work on this.

by CruNcher
Great work also the UI seems very well tought of must be currently the Killer Application designed for the Archos 5 IT in mind hehe, hope to see more nice things from you

on the Archos 5 IT and seeing what NioX5199 did here im sure he can pull it of, though i would be a little jaundiced being European and not able to use it here

(though the question remains if it makes sense to create such a workaround for integration if Android 2.0 with direct Flash 10 support is on the way anyways it would make this type of integration much easier for Developers by just opening the Website on Hulu

by NioX5199
Thanks for your replies! Unfortunatly I'm french ( currently in Canada but anyway ) and therefore I don't have access to hulu.com
I agree that it would be the dream app if I could stream show directly from the internet but even if I found a way technically speaking, it would be illegal I believe. I already have a few ideas for the next version but not streaming the shows, I don't have the data and don't really know where I could fetch it.
As you probably know Archos launched a development contest last month and I submitted this app. I'm waiting for the verdict. If anyone with a Archos 5 Tablet wants to test it, please feel free to give me feedbacks.

by ImSoFLyy
How did you get them icons with the 3g interface etc... at the top right

by WL7
Yeah, would also like to know, is there any addon for 3g already for a5a?

by NioX5199
There is no 3g on the Archos 5 IT. Theses are screenshots from the Android SDK's emulator. Basically an android phone emulator with an archos skin and screen aspect ratio.

by laaf2005
I tried the app, but it just loads and tries to get information but never does and stays on that screen. After exiting out I got an error message that it crashed.

by NioX5199
Arf, have you tried searching for shows in the search tab ? Are you sure your tablet is connected to wifi ? Thanks these info are really valuable.

by NioX5199
Hi all! Could someone with an archos tablet check on the Appslib if there are ratings and comments about my app tvDroid ? I do not have access to appslib, it doesn't work properly on the emulator. Thanks in advance. Bye

NioX5199 wrote:Hi all! Could someone with an archos tablet check on the Appslib if there are ratings and comments about my app tvDroid ? I do not have access to appslib, it doesn't work properly on the emulator. Thanks in advance. Bye

by geemacd
looks good, quite a few pictures missing though so hard to tell what's what on the screen eg. two and half men and ncis la etc, anyway we can cadd the pictures ourselves?

Would it also be possible to have shows sort themselves into alphabetical order for easier viewing?

SheilaHoff wrote:This looks great...BUT... will be AWESOME when we can stream these shows! Then we'll have arrived. Thanks for your work on this.

You may remember a while back we were discussing about how to stream hulu videos on the Archos 5 and wolf1306 said he used PlayOn to do that. I had PlayOn in the past but never used it with my Archos before the trial expired. Somehow I was able to download the trial again and am using with my Archos and it DOES let you stream hulu to your Archos. There are other sites offering videos and clips too: CBS, ESPN, Youtube, CNN and subscription services Amazon VOD and Netflix. Unfortunately the other free ones (CBS, CNN, etc.) haven't been working for me and I'm not sure why. But as I said, hulu DOES work and that makes me a pretty happy camper for the time being!

by laaf2005
Ok ive had some time to finally check it out and its working ok. Dont know why it crashed the first time. I added a few shows, but about half dont have pictures which makes it hard to know what show it is from the main screen. Maybe the option to show the name under the picture would help or at least the option to show names. Maybe instead you can change the view to a list view. I like the interface, but I find the pictures a little large. Maybe make them smaller so you can show more shows on the screen at a time. I will keep playing with it, so far its got potential. Its a nice way to keep track of your favorite shows.

by wibblewobble
I love this app, but like the previous poster, there are no pictures for some of my series.
Where does this download them from? Maybe we can upload ones that are missing?

by SheilaHoff
Just trying to dl this now and it keeps coming up with a force close for AppsLib. When I click Force Close it goes back to the library it doesn't close it. But I can't get this downloaded.

BTW...you asked about ratings. AppsLib shows it with 55 ratings in and 2.5 stars.

When I went to 1.7.33 I was having all kinds of problems w/r AppsLib. I downloaded the donut version and my problems went away.

I also have used App Manager from the Market to back it up, because prior to 1.7.33 an uninstall / reinstall of AppsLib seemed to help.

I've just reinstalled TVDroid (a full restage of my device) and while the application itself works fine, it isn't giving me the pictures, instead only giving me the "no picture available" for EVERYTHING.

I'm not really familiar with how you coded this, nor the database it uses. Do you (or does anyone else) know how to get the images to show up?

I know that it "caches" images (my device, prior to restaging, had them all stored on the HD, apparently, so they were all there!). Maybe we can just manually capture and save images?

I'd love to have this "fully working" again.

by Cary L. Brown
Can anyone (hint-hint-hint... the author, perhaps?) tell me where the "show image" is stored? Or how I can get this into the application? Please?
All times are UTC+01:00
Page 1 of 1